How many countries celebrate the Lunar New Year is a question that many people wonder. Let’s travel the world with imperialhotelschool.edu.vn to discover the Lunar New Year drink Along with the very interesting customs to welcome the new year through the following article.

China is one of the Countries that celebrate Lunar New Year like Vietnam. In this country, Tet is called the Spring Festival (春节). People have a long time to play and have a long Tet holiday. Tet atmosphere lasts from December 8 to the full moon of January.

Many large and small festivals are held across the country to welcome the new spring. People are eager to come home to celebrate Tet after a long time away from home.

People still keep many traditions to welcome the New Year such as sticking the image of the door-keeper, hanging red lanterns, upside-down Phuc characters, pasting couplets, lucky money to celebrate the age, going to the temple to pray for luck, watching a lion dance…

People still keep many traditions to welcome the traditional New Year such as sticking a picture of the god of the door, hanging red lanterns, etc.

The way to celebrate Tet in Hong Kong is a blend of traditional Chinese culture and modern features of the West. The most prominent activities during this festive season are: Taiwanese people also have a tradition of celebrating Tet like Vietnam. On this special holiday, everyone in the family will gather together to talk and enjoy traditional dishes such as soup, mustard greens, fish balls…

In the days leading up to the New Year, Taiwan’s night markets are also busier than ever. Vendors dressed in bold Taiwanese costumes sell colorful Tet items that make the night market interesting and busy. Many markets welcome visitors from 5pm to 12pm.

The festival of releasing sky lanterns to pray for peace and luck is also a highlight in Tet with an extremely romantic and fanciful scene. In the days leading up to Tet, Taiwan’s night markets are busier than ever

Korea is one of Countries that celebrate Lunar New Year. Here, Tet is called Seollal (설날). Tet holiday lasts for 3 days starting from the 1st day of the lunar calendar.

On this day, Koreans often wear the traditional costume of hanbok, worship their ancestors, gather with their families, receive money to celebrate the new year, participate in folk games such as yunnori (board game), gongginolie (similar to the mandarin umbrella), neolttwigi (seesaw jump).

Koreans must have tteok kuk (떡국), which means rice cake soup. They believe that eating rice cake soup will help shake off bad luck, purify the body and soul at the beginning of the new year. The family gathers together to play folk games

On the day of the Lunar New Year, Korean people often come to offer flowers at the monument of late President Kim Il Sung. They also make offerings to their ancestors on this holiday and participate in traditional games:

In terms of cuisine, if South Korea has rice cake soup, North Korea has songpyeon – a type of rice cake shaped like a crescent moon. This traditional cake contains the ancient concept of “the moon is waning and it will be full again”, proving that life is very changeable, the spirit is always towards good things. The traditional Mongolian New Year is called the White Month New Year (Tsagaan Sar). This is an important time of the year that signals the transition between cold winter and warm spring.

On this day, people often wear traditional costumes, gather at the house of the oldest person in the village, gather to chat and enjoy traditional dishes made from milk, horse meat, beef, lamb…

Mongolian men will perform an important ritual on the eve of New Year’s Eve. It is the custom of going up a mountain or hill to pray. When descending the mountain, they will choose the direction suitable for their age to depart and complete the ritual.

This island nation has a large number of Malaysians and Chinese. Therefore, Singapore is among the countries with the Lunar New Year.

From the 1st to the full moon of January, there are 3 major festivals held to celebrate the new year: the Lantern Festival, the Chingay Festival, and the River Hongbao Festival.

In which, Chingay is the biggest festival. Chingay lasts until the Lunar New Year at Marina Bay. Vehicles, groups of people dressed in splendid and colorful costumes will parade on the streets. Accompanied by exciting music and many special variety shows such as circus, magic, dance, lion dance… Vehicles, groups of people in splendid and colorful costumes parade on the streets

The Islamic nation of Indonesia officially recognized the Lunar New Year as a national holiday in 2001. The Chinese in this country celebrate the New Year in a very jubilant atmosphere with traditional activities such as worshiping, releasing animals, going to pagodas, etc. bathing statue…

Markets and shops are full of Tet shoppers. Flowers, lanterns and Tet decorations appear all over the streets and commercial centers. In Indonesia, there are also New Year’s Eve fireworks and lion and dragon dances.

The atmosphere of Tet here begins to be bustling from December to the full moon of January. The greeting “Selamat Hari Raya” is a greeting to celebrate a happy festival that Indonesians wish each other on all major festivals of the year.

In Indonesia, there are also New Year’s Eve fireworks and lion and dragon dances

About a quarter of Malaysia’s population is of Chinese ancestry. Therefore, the Lunar New Year is one of the most official and important holidays in this country.

The New Year fireworks display held at the Petronas Twin Towers is an indispensable annual activity during Tet.

Red color permeates all Chinatowns. The shopping centers are brilliant with red couplets, red lanterns. People mingled in the Tet atmosphere wishing each other good wishes and giving lucky red envelopes. People also participate in the magical shimmering lantern festival and go to the temple to pray for peace. On the new year, Filipinos will go to temples or churches to pray for a good and peaceful new year. Activities such as lion dance, dragon dance also take place very bustling.

The traditional food on Tet holiday in the Philippines is sweet rice cake (tikoy) made from glutinous rice, sugar, chicken eggs, and pork fat. This cake has the meaning of praying for family reunion, everyone is always together.

The traditional food on Tet holiday in the Philippines is sweet rice cake (tikoy).

Chol Chnam Thmay New Year Festival in Cambodia is held in the middle of April. Tet lasts for 3 days or 4 days with leap years. Each day has a different name: the first day is Chol Sangkran Thmay, the second day is Wonbof, the third day is Long Sak.

From the Khmer point of view, each year a different god (Tevoda) is sent to earth to take care of people. Therefore, on New Year’s Eve, families hold worship services to see off the old god and welcome the new god.

On the day of Chol Sangkran Thmay, people take a bath, go to the temple to worship and chant sutras. On Wonbof day, people will make rice offerings to monks and build small sand mountains to pray for blessings. Long Sak Day takes place with religious activities: bathing Buddha, bathing monks, praying for the souls of the dead. 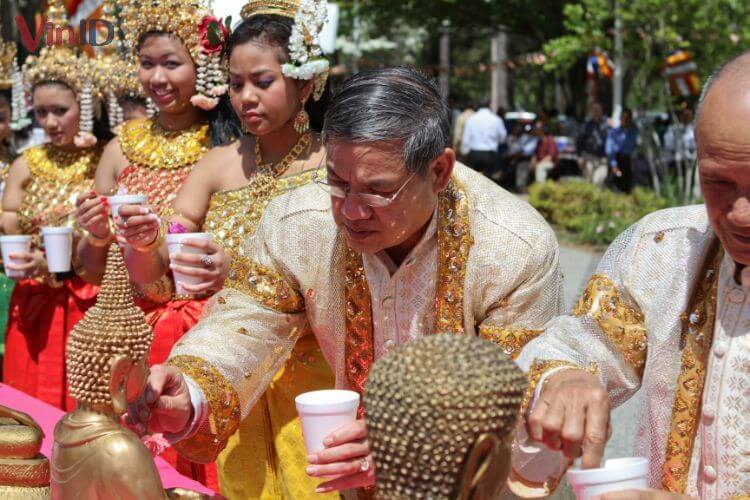 The traditional New Year in the land of golden pagodas is called Songkran. This New Year is calculated according to the Buddhist calendar (corresponding to three days 13, 14, 15 solar calendar).

The custom of splashing water during Tet is spectacular, fun and famous all over the world. People will use all kinds of items such as water guns, buckets, pots, water balloons, brass… to splash water on each other. The more people get wet, the luckier the new year will be. They also splash water on the elders to show respect.

The activities during the Thai traditional New Year are similar to those of Cambodia: going to the temple, making offerings, bathing the Buddha, releasing animals, building sand stupas on the riverbank, praying for blessings for grandparents and parents. 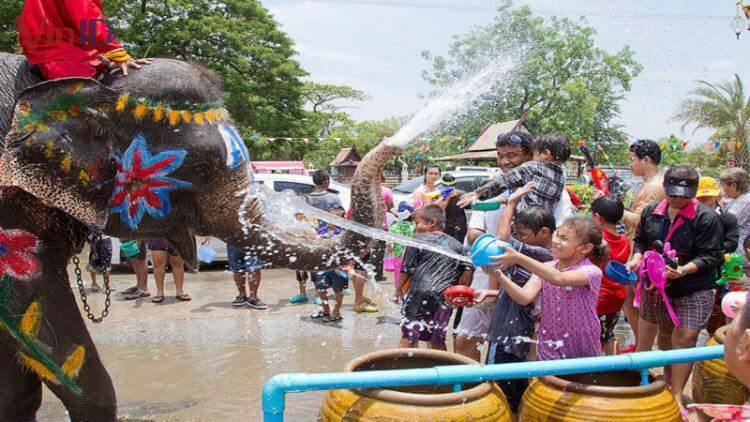 The custom of splashing water during Tet is very monumental, fun and famous all over the world

Lunar New Year in the middle of February to mid-March in India is called Holi. This spring festival is also welcomed by Hindus in Nepal.

This day marks the first warm rays of spring that have replaced the cold winter as well as evil being repelled by good.

This holiday is also known as the festival of sharing love or the festival of colors. The reason for this name is because the traditional activity of people during Tet is throwing colored powder. People mix colorful powders and then apply or throw them on people’s faces, people or clothes, whether they know them or not.

This festival is quite impressive and attracts the attention and participation of tourists from all over the world. 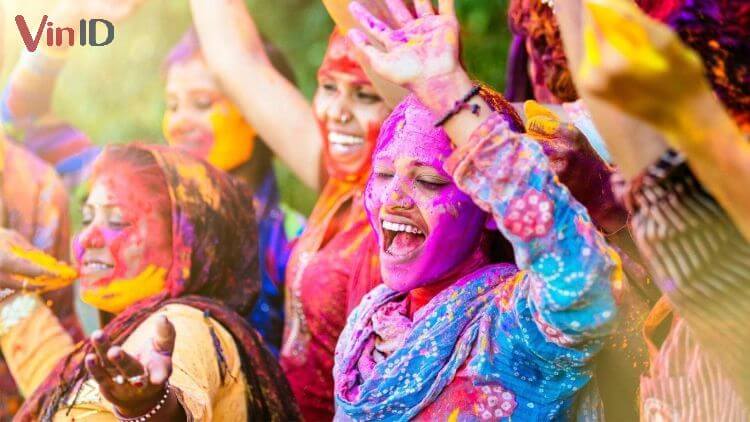 The traditional activity of people during Tet is throwing colored powder

Traditional New Year in Bhutan is called Losar or Tibetan New Year. Losar is celebrated in Bhutan and the whole of Tibet at the same time as or near the Lunar New Year in Vietnam.

This holiday has very ancient origins in pre-Buddhist times. In winter, people will perform the ritual of offering incense to the gods, protectors and spirits. Gradually, Losar became a Buddhist festival.

During Tet, people will visit pagodas, worship ancestors, dance and sing, hold festivals. The King of Bhutan will give New Year’s gifts to his subjects. 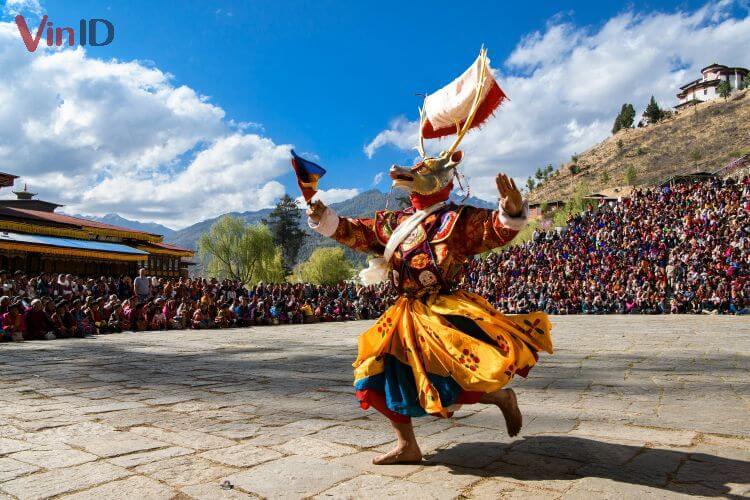 Festival on Losar Festival in Bhutan

Surely, through the above article, you have the answer to the question How many countries celebrate the Lunar New Year? and learn more interesting customs at Countries that celebrate Lunar New Year this. Don’t forget to open the imperialhotelschool.edu.vn app and send lucky money to relatives and friends to spread the joy of the New Year and send best wishes.